Some of the rights of juveniles in juvenile court differ from the rights of adults. A juvenile case will have a judge for the adjudication hearings as opposed to a jury of peers. Juveniles cannot have public trials, nor do they have the right to bail.

Despite these differences, the law also provides additional protections to juveniles such as:

Much like differences in sentences, these protections should help rehabilitate the juvenile into a productive adult. 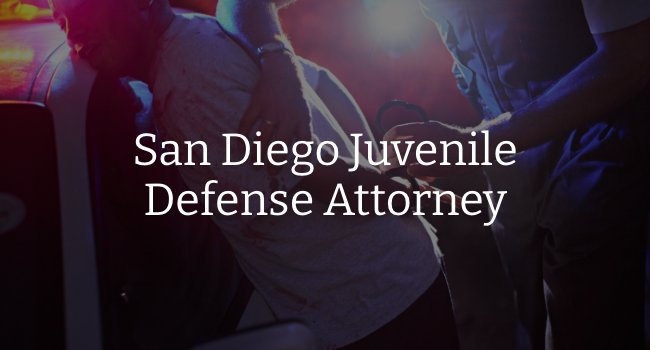 What is the Role of a Juvenile Defense Attorney?

The scope of representation in a juvenile defense trial should reach beyond the scope of an adult criminal trial. Due to the many complications and differences between an adult and juvenile trial, the juvenile crimes attorney should provide counsel and representation both before the initial detention hearing and through the post-disposition phases. With your San Diego juvenile defense lawyer, you can be assured that you will be receiving the most extensive representation, no matter the offense.

What are the Risk Factors of Juvenile Delinquency?

While California’s youth and young adult arrest rates have been declining in the past few decades, the risk for juvenile delinquency remains very real. By identifying the major risk factors of juvenile delinquency, it is possible to act to continue to reduce delinquent behaviors and acts, further reducing arrest and detention rates.

Risk factors are within several domains, including individual, family, peers, and community. Any of these potential factors could show a risk for delinquency. Some risk factors include:

While the presence of any one of these factors does not guarantee juvenile delinquency, several risk factors occurring in tandem can lead to delinquent behaviors. Certain risk factors can also have greater effects on children in different stages of development. The chances of these risk factors leading to delinquency are reducible by implementing protective strategies.

Protective strategies fall into the same influence categories as risk factors: family, individual, peers, and community. They can help reduce the risks of juvenile delinquency. Some protective factors include:

To provide the best potential environment for juveniles, ongoing assessment of risk and protective factors is necessary. It is also important to not just address generic needs, but those of the individual juvenile. By building on individual strengths, the chances of future delinquency and justice system involvement decreases, and children can learn to thrive while overcoming challenges.

How do I Hire a San Diego Juvenile Defense Attorney?

We are available to take appointments days, evenings, and weekends. our law office is bilingual and we accept all major credit cards.

Juveniles are defined as minors or those under the age of 18. In most cases juveniles are treated differently from adult offenders. Even though many juvenile offenses, such as shoplifting, receiving stolen property, assault, sexual assault, etc., are comparable to adult offenses, the penalties could often be more severe for juveniles. Offenses that are unique to juveniles include breaking curfew and truancy.

There are separate courts, institutions, and rules governing the juvenile process; and generally, the juvenile court system will make every effort to rehabilitate the child rather than choose incarceration. Only in extreme cases such as murder, kidnapping, arson, and rape will a juvenile be tried as an adult. The courts may hold a “fitness hearing” to decide whether or not to transfer the juvenile to the adult court system. The court will base its decision on the following factors:

San Diego County is home to two maximum-security juvenile detention centers. East Mesa Juvenile Detention Facility which opened in 2004, is just east of Otay Mesa and the Kearny Mesa Juvenile Detention Facility is in the suburban neighborhood of Birdland. San Diego is also home to three minimum security rehabilitation facilities throughout the county. The idea of your child spending time in a juvenile detention facility is always a scary thought, that’s why it’s imperative to hire a San Diego juvenile defense lawyer to represent your dependent while facing juvenile offenses.

The laws may differ for adults and juveniles, but for the most part, the rights do not. For example, you must be read your Miranda rights. A good San Diego juvenile criminal defense attorney may be your only defense against facing jail time or probation. In every case, the charge must be vigorously defended to prevent a conviction.

“Highly recommend him if you ever need a lawyer.  Mr. Ramos recently handled a legal matter for us and happened to be very professional, knowledgeable and effective.  He was extremely helpful and was able to have our case dismissed!  Words can’t express our gratitude and we are very happy with the results.  Thank you!”