If you have been accused and/or arrested for committing a sex crime in San Diego, such as lewd and lascivious conduct, child molestation, child pornography, prostitution, sexual battery or assault, statutory rape, solicitation, rape, date rape, or indecent exposure, you need an aggressive and experienced San Diego sex crimes attorney. 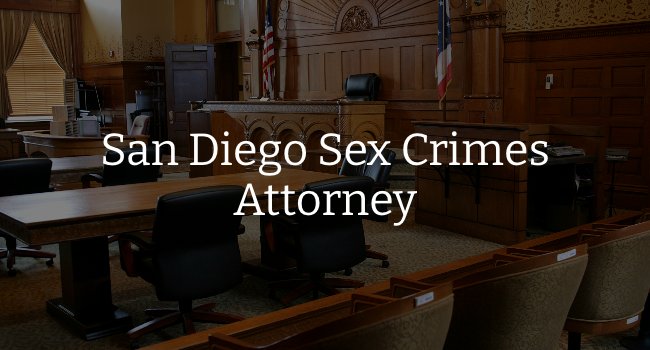 At our English-Spanish speaking law firm, our defense attorneys proactively defend our clients against sex crime charges. When retained in the early stages of an investigation or sex offense case, we begin negotiating with the prosecution even before they’ve charged our client with a specific sex crime. Because of our aggressive approach, our San Diego sex crimes lawyer has had sex crime charges altered, reduced, and dismissed entirely for our clients.

What Are Defenses to Sex Crimes?

Sex crimes are some of the most severe acts someone can commit. California law reflects this seriousness in its punishments. In addition to jail time and fines, those found guilty of committing sex crimes also face a lifetime registry on California’s sex offender list.

While these punishments are suitable for sex offenders, they can be life-altering for someone falsely accused of the crime. Putting aside the criminal record aspect, being a registered sex offender can drastically impact your work, living arrangements, and other situations. As the prosecution has the burden of proof in such cases, you can protect yourself with the appropriate defense.

Innocence is one of the most common forms of defense against sex crimes. You can claim that you were not near the alleged victim at the time of the assault and provide evidence that serves as an alibi to back up your claim. Witness collaborations, plane tickets, credit card bills, and hotel receipts are just some examples of the evidence you can present to confirm your alibi.

Likewise, you can also defend yourself by claiming that the alleged victim misidentified you as the perpetrator. You will also need to provide physical evidence that supports this claim. DNA evidence is one of the most accurate and effective ways to determine your presence at the crime scene. If the alleged victim has gone through a sexual assault forensic exam, you may be able to compare your DNA to that of the perpetrator to further back up your claim.

One of the cornerstones of many sex crime definitions is that any actions must be without the alleged victim’s consent. If you admit to the actions taken but can prove the alleged victim consented to them, then you may be able to negate the charges. However, proving consent for sexual contact can be a difficult task, so this defense is not the best course, unless you have some form of irrefutable proof that shows consent.

It’s also important to note that consent cannot serve as a defense in cases of statutory rape. California sets a hard line of consent at age 18, and no one 17 or younger can legally provide his or her consent to sexual actions. In cases where the alleged victim cannot understand the sexual nature of the behavior, such as incapacitation, the alleged victim is also not able to provide consent.

Having a mental disorder at the time of the crime can also serve as a defense against sex crime allegations. This often applies to those who are incapable of recognizing the illegality of their actions or have a lack of inhibitions that would have prevented them from engaging in the criminal behavior. While this may not completely acquit you of the crime, it can often lead to a less harsh sentencing.

You can plead for mental incapacity or insanity under California law if you cannot do one or both of the following:

If you are successful in such a defense, the court will judge that you are to go to a state hospital instead of a state prison. You will be in the hospital until officers decide that you are no longer a risk to yourself or others. Depending on your condition, you may have a life sentence in the mental hospital.

The correct defense to your case will depend on the circumstances surrounding your alleged crimes, and it will vary. Working with a skilled criminal defense attorney can help you understand the circumstances involving your case and developing the best defense strategy to prevent false accusations of sex crimes from impacting the rest of your life.

What are the Different Types of Sex Crimes in California?

In California, sexual behavior is considered criminal if it falls under one of the following offenses:

Younger children sometimes confuse reality with suggestions and implications made by suspicious and concerned adults, including social workers and law enforcement personnel. Often, they will answer questions affirmatively because they feel they are “supposed to”, and want to do what is expected of them. This is why it is so important to hire an experienced San Diego child molestation lawyer to help in this difficult and oftentimes emotional situation.

What will typically happen is the child will undergo traumatizing physical and medical examinations by physicians and medical personnel from San Diego’s Sexual Abuse Response Team, or SART. Once the child has been subjected to extensive biological tests, more suggestive questioning will follow, which sometimes tends to “program” or “convince” the child that inappropriate behavior has actually occurred.

Once the SART ordeal has wound down, the San Diego Child Protective Services (CPS) Team will conduct playroom sessions with the child using dolls and toys to demonstrate what they suspect, further making the alleged incident seem “real” to the child. This is a confusing time for everyone involved and will require knowledgeable legal representation.

If you are suspected of a rape, including date rape, or sexual battery charge, or have been arrested, it is crucial that you consult with a proven and skilled San Diego rape defense attorney who has successful experience defending rape and sex crime cases. A rape charge is considered a violent felony crime and a conviction will result in a lengthy sentence in a state prison. If you are facing rape or date rape charges, contact our date rape attorney for help. Our sexual assault attorney has years of experience and the skills to help with this serious possibility.

In California, rape is defined as forced sexual intercourse with a person against their will. It also includes intercourse that is nonconsensual. Intercourse is considered non-consensual if the other party is unconscious, intentionally drugged (as in “date rape”), or by coercion or intimidation including threatening the other person into submission.

Most rape charges can be successfully defended, and many times dismissed altogether. Hiring an experienced and aggressive sex crimes attorney knowledgeable in this area of criminal law can make all the difference. Call our law offices 24 hours per day at (619) 231-1830 and we will provide you with a free rape defense consultation.

What are the Consequences of California Sex Offense Charges?

In some instances in California, a sex crime conviction counts as a strike on your criminal record. If it is serious enough to be labeled a “1 strike” case, you could be penalized with 25 years to a life of prison time on the first conviction. Each strike a person accumulates adds additional time to their sentence. A third strike automatically puts the defendant at risk of a sentence of 25 years to life in prison.

If you are convicted of sexual assault or a sex-related crime in San Diego County, you face jail, child custody and visitation loss, loss of rights to vote and own guns or firearms, be subjected to mandatory AIDS testing, financial penalties, counseling, probation, parole, and lifetime sex offender registration and tracking.

If you have questions regarding sex crimes, contact an experienced San Diego sex crimes attorney at George H. Ramos, Jr. today for a free consultation. We are available to take appointments days, evenings, and weekends. We accept all major credit cards and are bilingual in English and Spanish.

What is Megan’s Law?

If convicted of a sex crime in California, under Megan’s Law you will be required to list your name and address on a nationwide sex offender registry, and notify local law enforcement each time you change your place of residence. Being labeled as a “sex offender” makes life is a hardship for most people. The label may adversely affect employment opportunities and living arrangements. In the recent news, we have seen how horribly many sex offenders are treated by their communities. Many times they are forced to leave their homes because of the actions of their neighbors.

The law firm of George H. Ramos, Jr. & Associates, is located in San Diego and serves clients throughout Southern California. Our legal time will fight for you by crafting strong defense strategies against sex crime charges. Whether you have been accused of unlawful sexual intercourse, internet sex crimes, human trafficking, or sexual battery, our experienced legal team will aggressively defend your rights.